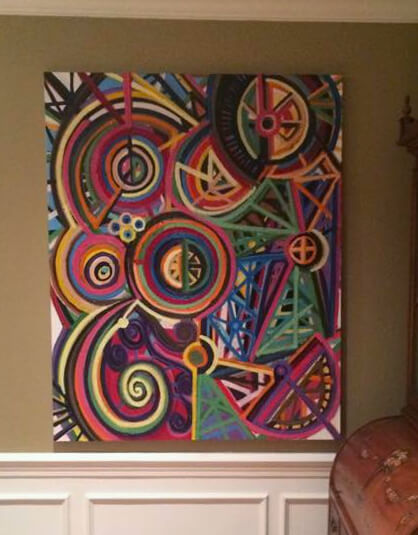 At first glance, the bright colors, lines and geometric shapes seem, well, like an assortment of colors, lines and shapes. But each circle, each triangle, each slash of fire engine red or sunny yellow has meaning behind it, according to artist and Penn State School of Visual Arts alumnus Michael Fratangelo (Class of 2001, bachelor of science in art education).

“The purpose of my work is to communicate the spiritual essence of my subjects,” Fratangelo writes on his website, fratangelo.com. “I strive to transcend the physical world in the subjects I paint, to reach the metaphysical.”

A native and current resident of Pittsburgh, Fratangelo never intended to be an artist. He started his college career as a healthy policy and administration major, but ultimately followed his heart to the art studio. It was in one of John Bowman’s classes that he realized he was meant to be a painter. “In his class, lightning struck — I was caught by painting. I was literally running to the Paterno Library to get books on Picasso. I knew I had found it, my purpose.”

Bowman recognized Fratangelo had a unique talent. One day, he took him aside after looking at his work and said, “Is that what you see? You really have something.”

Fratangelo acknowledges he has a gift. “I do not take my ability for granted,” he said. “Each work is a quest to puncture through the visible reality into the deeper mystical realm.”

Fratangelo shares his gift through commissioned portraits. In spring 2013, he offered a commission for the Arts and Architecture Alumni Society’s Charitybuzz auction. The Wigler family bought the item and the finished painting is now hanging in their home in Great Neck, New York.

Andrew Wigler said his family is very happy with the portrait, even though they had no idea how it would turn out. “The ultimate outcome is absolutely terrific,” he said, noting the painting is also “a tremendous conversation piece” because it’s so unique.

Fratangelo starts the painting process by talking with his portrait subjects, preferably in person. “I need to start somewhere; I need a foundation for the work. I ask their favorite colors, seasons, time of day, food, clothes and music. I ask how others would describe them, and I ask about their childhood and their mentors,” he explained, noting it usually takes four to five months for him to complete a portrait.

“This is a very powerful family, and it comes out in the portrait,” said Fratangelo.

Fratangelo’s goal is to gain greater recognition for his portraits. “I want to get to the next level, and put my dent in the universe.”